New version of Sider for PES 2019
Juce released a new version of Sider ( 0.5.4 ) for Pro Evolution Soccer 2019. This version is important for future mods since it allows lua scripting that will help to create amazing mods like entrance graphics ( center circle, tunnel arches, trophies, etc ) Get it from our Download Center and take care of instructions.

Stadiums Pack for PES 2019
An amazing work by MJTS-140914 for PES 2019. An incredible stadium pack including Signal Iduna Park, Old Trafford, Wanda Metropolitano, Allianz Stadium ( Juventus ) and others. Easy to install using Sider by Juce. Check out the details.

Juce is Back to PES 2019 - Sider 0.5
Juce, creator of Kit Server, is back to Pro Evolution Soccer with Sider. An amazing tool that allows you to easily import stuff to the game. Just unpack, run the tool and start PES 2019. That´s all you need to enjoy new mods like balls faces, etc. Check out details on how to get Sider and use it.

Here is an add-on for the Jupiler Pro League (based on the Smoke Patch) for adboards, stadium billboards (hoardings) and corner flags.

It overwrites the default PEU league but the stadium hoardings are global. Works on PES 2017, 18 and 19. The adboards are about 60% authentic (no video) and the rest made-up.

As always, enjoy, share and if anyone has better ones, let me know. 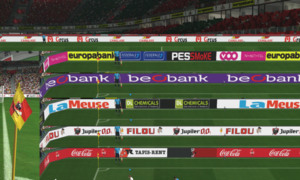 Pro Evolution Soccer 2019 is a football simulation video game published by Konami. The game is the 18th installment in the PES series.

However, Konami announced that it did not renew its deal with UEFA for the Champions League, Europa League, and the UEFA Super Cup which they had for 10 year.