ModdingWay 10 Years - We are back
After a long break due to personal problems, we are back. We are really sorry for not being able to create mods during previous 18 / 19 season but we will be back for 19 / 20. This is a great year for us since it´s our 10th anniversary so we hope to create the best mods for your favorite games. Let us know if you still looking for FIFA 14, 15 or 16 mods for next season. 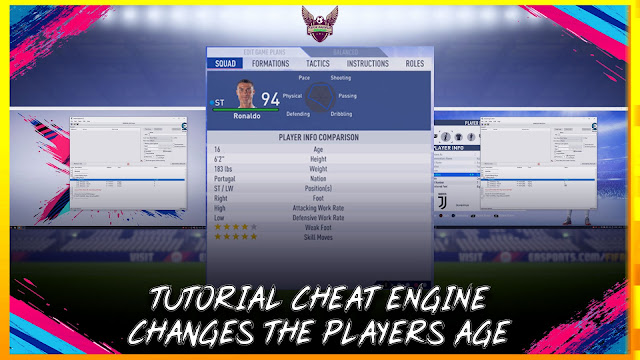 Well this tutorial is to help change the age of the players.

In the video has the step by step.

Here is the download link, you need cheat engine 6.8.
Open FIFA and the cheat engine. Follow the video.

FIFA 19 features the UEFA club competitions for the first time, including the UEFA Champions League. The character Alex Hunter, who first appeared in FIFA 17 returns for the third and final installment of "The Journey", entitled, "The Journey: Champions".

Gameplay changes on FIFA 19 include the new "Active Touch System"— an overhaul of player control, "timed finishing"— where the kick button may be pressed a second time to determine the exact moment the ball is actually kicked, "50/50 battles"— a system for determining how likely a player will win loose balls, and "Dynamic Tactics"— which allows players to configure strategies, and switch between them in real-time during a match.