Hey, I'm Jordi. Creator of the , which overhauls the Career Mode of FIFA 20.

Realistic AI contract renewal
- The CPU now renews nearly all of their player's contracts, decent free agents will be rare.

Realistic Sackings
- Low league positions and/or UEFA competition(s) will have a higher chance to get you fired
- The club is less ruthless, and won't sack you as easily.

Realistic Player Values
- Values are much more realistic, wonderkids will cost alot more than the default values from the normal FIFA 20 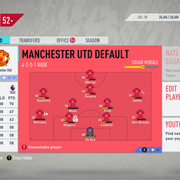 Plus more other realistic tweaks.