PES 2018 Data Pack 4.0 will deliver 100 new faces
Konami has announced today that its Data Pack 4.0 for PES 2018 will be available via free download on Steam tomorrow. The new update will bring numerous visual changes to partner club players whose faces and hairstyles will all be updated.

UEFA ends partnership with Konami
After many years UEFA ends their partnership with Konami. This means that UEFA Champions League and Europa League will be no longer available in Pro Evolution Soccer. This was announced by UEFA this Wednesday. Will this be EA chance to take Konami place and have UEFA tournaments licensed in FIFA 19 ?

PES 2018 Data Pack 3 now available on Steam
Konami has announced today that its Data Pack 3.0 for PES 2018 is now available to download for free on Steam. The new update to the game has seen the addition of 11 new national team kits : Germany, Japan, Belgium, Columbia, Uruguay, Spain, Italy, Northern Ireland, Argentina, Wales and the Czech Republic. 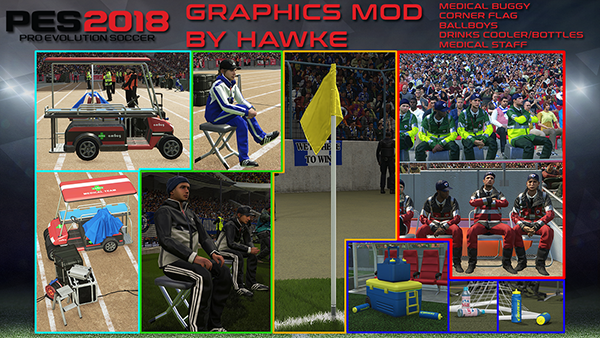 Download Graphics Mod. This is a mod for Pro Evolution Soccer 2018 video game.